Mini Reviews: The Schwab Edition – (In which I flail endlessly!) 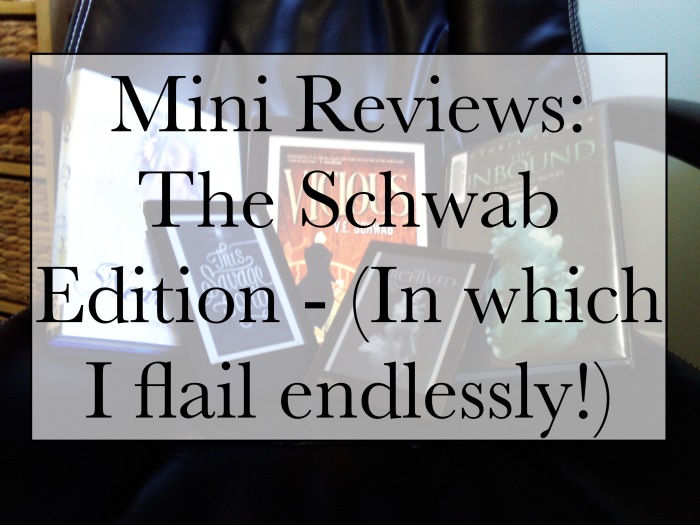 Today I’m going to do some mini reviews of, you guessed it, Schwab books! You *may* have noticed I adore this amazing wonderful author, so, without further ado, I’m going to be reviewing the three Schwab books I’ve read in the past couple of months!

WOW!! How is everything Schwab writes such utter perfection?!?! Like, HOW?! This book was so good, and emotional, and creepy, and WOW!!!

I read this ages ago, so my memory isn’t the freshest, but I do remember the wonderful world building, and the delicious creepiness. And just the overall, pure amazingness.

So. I few things:

Seriously, it was SO GOOD!!! The world was SO fascinating, and wow. Just wow. And some of the big reveals later on? OH MY GOSH, what even were those? THEY WERE SPECTACULAR!!!!

– IT WAS SO DELICIOUSLY CREEPY!!!

Dead corpselike things walking around and being weird? Sign me up! What an amazing concept, and it was just so well executed!!!!! It sent chills down my spine, and creeped me out, in the most amazing way, and AHJGJHGKEFGAGFADKAFDFSDKSFFKFKK!!!!!!!

-The characters were… good.

They were very well developed, they just weren’t… that original. I liked MC, but I can’t even remember her name. So. And crush dude? He was nice. I liked him. What was his name? Or his personality? I honestly don’t know. I did like best friend though, whatever her name was.

And mysterious boy… was his name Owen? Or Oliver? He was great!

[su_spoiler title=”Spoilers” icon=”chevron”]Honestly his development was spot on, and I was so wowed by it, and WHAT A CHARACTER!!! And I mean… I never quite trusted him, but I wanted to like him. I really, really wanted to like him. And then he was the villain, and I can’t say I was shocked, but I was sad, because I genuinely liked him, and still do, even as I hate him. He was a pretty amazing villain![/su_spoiler]

WHAT A SPECTACULAR CHARACTER!!!!!!

This is not to say I didn’t like the characters. They were very good. I liked them a lot actually. They just… didn’t stand up out of the large lineup of fictional characters I’ve read over the years. But they were likeable enough.

Seriously, I was crying from page one. Not even kidding. It was SO emotional, because there was so much grief there, and it was so painful, and THIS BOOK HURT! A LOT!

– The plot was well woven!

It was intense and exciting, and unique, and twisty, and I am impressed.

The writing was gorgeous, as always, and also it would alternate between present time, and her talking to her dead grandfather, which sounds really weird when put like that, but… It was almost as if she were writing letters to him? Only minus the actual letter writing? Anyways, they were flashbacks, and GORGEOUSLY done ones.

So overall? Definitely read this book! It’s gorgeous, and I LOVE IT SO MUCH!!!

The characters were morally grey and wonderful!

The writing was awesome (I mean, it’s Schwab. Of course it was.), and I adored it.

The world building was fantastic! I adored all the different superpowers, and the whole concept behind them was soooo unique. Love. It.

The plot was solid. Nothing more to say there really, but it was good. (I read this over a month ago and can’t remember what the plot WAS, so don’t mind me.)

Overall, I adored this book! I just sort of felt like something was… lacking. Just a little. I don’t know. But still, I loved it, and can I just flail please? Yes, yes I can flail. THIS BOOK WAS AMAZING!!!!

WOW! I cannot believe this is Schwab’s debut! This was, in my opinion, one of her strongest works! I mean, maybe not *quite* Monsters of Verity or Shades of Magic good, but close! It was a stronger book than The Archived, and I liked it better than Vicious.

Because wow, this book was spectacular! Everything about it was just wonderful!

Let’s do a list of things I liked, shall we? Because I like lists, and also because there was literally nothing I disliked! (Except for the fact that it was so so good, and a fairly short book, and therefore not long enough. Or maybe I’m just mourning the fact that I have now read all of Schwab’s published works (except for the middle grade series about angels that I still can’t quite believe she wrote…))

AHHHHHHHHHHH!!! There’s so much I’m missing, but OH MY GOSH, I JUST LOVED THIS BOOK SO MUCH!!! You should DEFINITELY go read it! Right away. Just don’t be dumb like me and read it late at night.

So I’m hoping that those reviews were semi-coherent? I am pretty much trash for Schwab, and will read anything this woman writes. Anything. And these three did not disappoint. The Archived was fantastic! Vicious was dark and morally grey!* The Near Witch was downright terrifying, in the very best way!

Wow, I loved all these books so much. So. Very. Much.

Have you read any of these? What did you think? Are you planning to read these? Have you read anything by Schwab? (if not, hurry up and do) What’s your favourite Schwab book?