Song Of The Lioness

This is one of my absolute favourite series, and I just reread it recently, I wanted to review it, but I didn’t feel like talking about just one of the books (and thought it would be silly to do four posts in a day), so I’m going to review them all as one post.

(Warning: Because I’m reviewing all of them, there may be some mild spoilers for the earlier books)

So as I said, this is one of my favourite series, it’s sooooooo good!

I really like the main character, Alanna. She’s going to be sent off to a convent, to be turned into a proper lady, and learn magic, while her twin brother, Thom, is being sent to the capital city to become a knight. Neither of them are very keen on this plan, Alanna wants to become a knight, and Thom wants to be a sorcerer. Thom just sits around complaining, but Alanna decides she’s going to do something about it. She cuts her hair, gets Thom to forge their father’s signature on letters saying they are twin brothers (boys can learn magic, but girl can’t be knights), and convinces him to switch places.

The first book follows Alanna (or ‘Alan’ as she’s known by everyone else) for the first four years of her training. Basically the awkward years where she’s going through puberty while disguised as a boy, which, as you might guess, gets a bit difficult.

I love most of the characters in these, I already mentioned how much I like Alanna, but there’s other characters I love too.
I really like Jonathon, he’s the prince, but he isn’t pompous or spoiled. He’s a good friend to Alanna, and he’s just sort of nice.
My favourite character however, is George Cooper, he’s the king of thieves, and a total flirt (I spent waaayy too long  thinking he was flirting with Alanna when they first met. He wasn’t. He thought she was a boy…), both of which are things that I don’t usually like in a person, but yet somehow he manages to be my favourite anyway…
All the characters in these also seem really real, I can totally believe that all of them could be real people, and not made up characters. 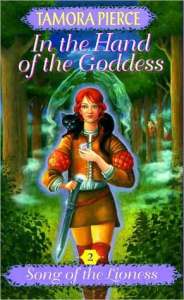 In the Hand of the Goddess

Once again, I love these. So. Much.

This book follows Alanna for the last four years of her training, so she’s a bit older, and starting to worry about her Ordeal Of Knighthood (That’s basically what it sounds like, a mysterious ordeal that you need to pass to become a knight).

As the title implies, the goddess comes to Alanna (I normally avoid the whole gods and goddesses interfering in main characters life thing, but this book does it well), tells her she supports her, and leaves a magical talking cat behind to watch over her. It really isn’t as strange as it sounds…
The cat (Faithful) is one of my absolute favourite characters, I mean, he’s a sarcastic talking cat, what’s not to love? When I reread these, I spent most of the first book waiting impatiently for Faithful to come in, because He. Is. So. Funny! I like him a lot, in case you couldn’t tell.

This book is really funny (So is the first one), Faithful always makes me laugh, but George,  some of the knights, and a couple of the squires crack me up too sometimes. 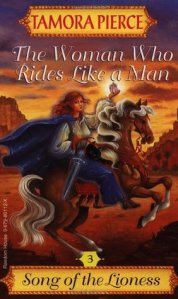 Yes, I am just going to rate all of these five stars, and no, it wouldn’t have made more sense to just rate the entire series together. I mean maybe it would have. But whatever.

In this book Alanna is a knight, and is traveling to get away from the anger about her lying to everybody for eight years. She ends up being taken in by the desert tribespeople, the Bazhir, and sort of tries to get them to change all their customs… which works better than you’d expect, but still, Alanna really? You actually thought this was a good idea? Obviously though, it also makes her some enemies.

This book introduces quite a few new characters, my favourites of them are the three Bazhir kids who follow her around, Ishak, Kara, and Kourrem. Ishak is impatient, headstrong, and slightly arrogant, but he has a good heart. Kara is somewhat proper, but she also has quite a delightful personality, and is very kind. Kourrem is my favourite of the three, unlike Kara, she most certainly is not proper, although she tries to be. She’s also curious and cheerful.

The one thing that annoys me a little about this book is Jon, he’s one of my favourites in the others, but in this book he gets a bit arrogant, and entitled, and I don’t like him very much. It wasn’t exactly unbelievable, it was just very frustrating.

I did find though, that Alanna really develops in this book, I mean obviously she develops in the earlier books as well, but I think that this was the first chance she had to really be herself for like eight years, and because of that, she was able to grow as a character in ways she wasn’t able to before. She also had to figure out what she wants to do with her life, now that she’s accomplished her goal of becoming a knight. As a result, this book is less action packed than the earlier ones, but personally I don’t mind, there is still plenty of action, and even the slower parts aren’t boring.

This is probably my least favourite in the series, but it’s still amazing.

This book follows Alanna as she hunts for the legendary Dominion Jewel, hoping to prove herself (slightly unnecessarily) as a knight. And then comes home to find her country in a precarious political situation.

This book involves the most traveling of them all, and I find it develops the world the most (although it was well developed in the first three too).

This book introduces one of my favourite characters, and one of my least favourite characters.
Liam. He drives me INSANE! He’s Alanna’s love interest, and every time he calls her ‘kitten’ I want to hit him (well, not quite, but only because I’m not at all a violent person), I don’t know why he bothers me so much, he’s not a bad guy, he’s not a mean person, I just can’t stand him for some reason.

However it also introduces Thayet and Buri, Thayet is a foreign princess, fleeing from her war torn country, and I sort of love her. Actually not sort of. I just love her. She’s fierce, funny, and she doesn’t like being treated different just because she’s royal.
Buri is her very loyal, fierce, and slightly rude bodyguard. Possibly a bit more than slightly rude, but she’s still very likeable.

I think this book wrapped up the series satisfactorily, and I’m happy with how things turned out.

This is a great series.

I think everybody should read this, it’s full of action, adventure, humour, and wonderful, wonderful characters, and it’s by one of my favourite authors.

Have you read Song of the Lioness? Or anything else by Tamora Pierce? Are you going to? Do you like books about knights?

Join 109 other subscribers
Follow Countless Words With Iris on WordPress.com