Book Review: Tess of the Road – Beautiful Everything + Heartache! 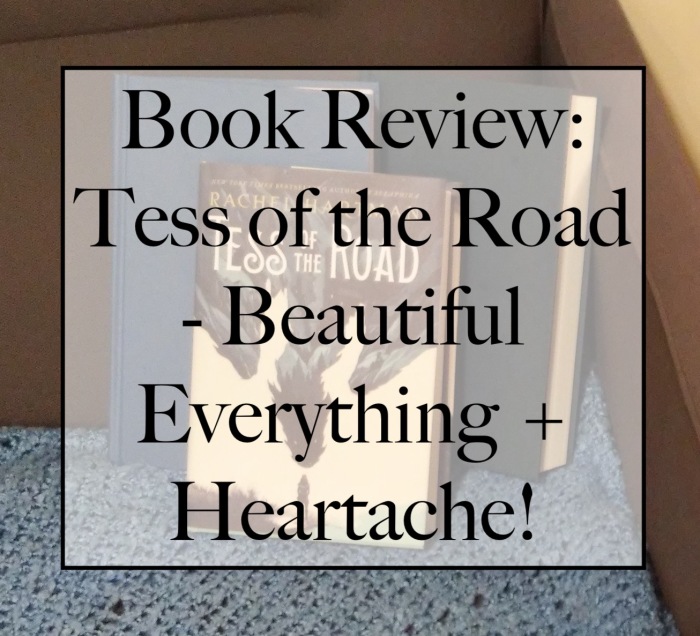 Tess of the Road

I’m still struggling with how to review Tess of the Road. It was AMAZING. It completely blew me away, and I just… I don’t have the words to describe the beauty that is this book!

This isn’t your typical fantasy. There’s not much of the politics or cool magic from Seraphina. And it isn’t, as I assumed it would be, a light fluffy adventure book either.

Tess of the Road is about Tess, and her journey to cope with her past. It’s very much a character driven book. The fantasy world is a nice background for that, and there are fantasy elements to the story, but this book is really about Tess’s healing process.

Although this wasn’t a plot driven book, what plot there was is certainly well done.

The World Serpents are fascinating! I’m looking forward to learning more about them in the sequel, because seriously, SO COOL!

And Tess’s adventures were awesome too! She met so many different people along the way, and got into so many interesting situations. Mostly these served to help her character grow and change as a character, but they were also quite interesting to read about.

I adore Rachel Hartman’s writing style! It’s beautiful, and lyrical, without being overly flowery or hard to read, it flows really well, and also really packs a punch emotionally!

I’m not doing her writing justice, I know I’m not. So just go read one of her books, okay?

This takes place in the same world as the author’s other series, Seraphina, which I absolutely loved, so being back in this world was awesome!

It’s such a richly developed world. From the cultures of each of the many countries, to the incredibly richly developed religion and mythology, to the fascinating creatures… The Saar, the Quigutl, the World Serpents… All of them are SO interesting, and so different, and I could read about them all day!

I don’t know if the setting would seem quite as well developed if you haven’t read Seraphina, but it definitely still stands up on its own. And besides Seraphina is amazing, and there are huge spoilers for it in Tess… So read Seraphina first anyways.

The characters in Tess of the Road are amazing! SO great! Due to the fact that Tess spends most of the book traveling, there are a lot of characters who were in it for only a small amount of time, but they still manage to be well developed, wonderful characters. Then there are the actual big characters.

Obviously first off, we have Tess. I love Tess! I love Tess SO MUCH!!

I’ve seen a lot of people saying they didn’t like her, and I guess I get that, but I don’t know when the last time a main character captured my heart like this was!

We first meet Tess as a bright, fun loving, mischievous six-year-old. I instantly fell in love with her.

Then we meet her again, just over ten years later, and it’s obvious things have changed. She’s a sad, serious young woman, who’s obviously gone through a lot of hardship. Seeing her like this after seeing six-year-old Tess just broke my heart.

Tess is a very flawed character. She’s realistic, but she’s really broken. She’s been through a lot, and she tends to deal with it by drinking and picking fights. She isn’t always a nice person, but my heart just absolutely aches for her. Watching her grow and change over the course of the book was amazing, and her development was spot on.

I love Tess with all my heart. Nothing can ever change that. I just want to hug her and tell her everything is going to be alright, because I want nothing more than her happiness!

Can you tell I love Tess?

Anyways, on to the other characters.

I really enjoy Pathka’s development. He’s Tess’s Quigutl friend, and well… at times I loved him. He’s hilarious. And at times… he was awful. He was a very layered character, and I hope to see more of him, and his relationship with his daughter.

Speaking of family relationships, I loved reading about Tess’s relationship with her sisters. Jeanne was… a bit spoiled and frustrating at times. I don’t think she ever realized how much Tess did for her. But at the same time, Tess can be awful to her. They’re no longer as close as they used to be growing up, and it’s hard on both of them.

And her relationship with Seraphina is great to read about too. Obviously, I know and love Seraphina already, but her and Tess’s relationship is a bit more complicated. Tess doesn’t view Seraphina in a very good light, and it’s interesting to see.

And then there’s her mother. Can Tess’s mother go die in a hole please? She is absolutely <i>awful</i> to poor Tess, and seriously, can she just die?

I am completely and utterly blown away! I did not expect this book to be anywhere near this good! Tess of the Road isn’t and easy read, but it’s an important book, that tackles a lot of big issues. It was heartbreaking and touching, and hopeful. What a beautiful book.

Read this book. You won’t regret it.

Have you read Tess of the Road? How about Seraphina? Are you going to? (You should!) Do you like character driven stories?